How to Fix Runtime Errors 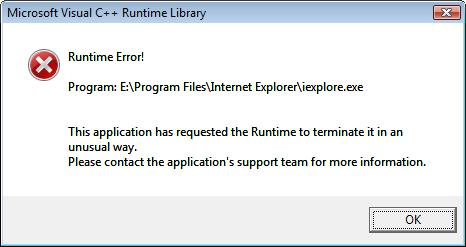 A runtime error is usually less serious than other errors. They may cause data loss and other performance issues, but they usually won’t crash your computer altogether. However, runtime errors are also the most common causes of data loss, which can be catastrophic, depending on the data.

There are three common reasons for runtime errors: software issues, hardware issues, and viruses. Let’s look at them one at a time.

Software issues are the most common cause of run-time errors. They are usually caused by either a conflict between two different programs, or due to some bug in the program.

Some kind of bug in the programming can usually be quickly solved. First, you’ll need to update your operating system, be it Windows or Mac OSX. Next, you’ll need to make sure all the drivers on your computer are up-to-date. Run a registry cleaner as well; they can help to smooth out any number of operational problems.

And finally, you’ll have to make sure that the program you’re running is properly updated. Older versions of software tend to be more susceptible to bugs and errors, especially in programs that need to go online.

Conflicting programs are a bit more difficult to solve. If programs are conflicting with one another, it is most likely because they share similar functions, and that overlap causes one or both programs to fail.  If you can’t get the two programs to work together, your only real option is to only run one at a time.

It is also possible that the run-time errors is due to poor programming. Check online and see if other people are running into the same problem as you. It could be that this is a well-known issue that the software manufacturers have failed to fix.

The next most likely issue is some kind of hardware error. There are a couple of ways that your hardware could be to blame.

First, some piece of hardware could simply be malfunctioning. Malfunctioning hardware—especially hardware that has sustained some sort of physical damage—can behave very unpredictably, and you can never really tell what the problem is. For runtime errors, the most common type of hardware issue is with your computer’s memory. Programs require access to your computer’s memory. And if they can’t get all the memory they need, you’ll be looking at more and more errors.

A lack of memory is fairly simple to fix. You have two options: either stop running multiple programs at once, or upgrade your computer’s memory. If your computer doesn’t meet the minimum memory requirements for the program in question, you’ll have no choice but to upgrade.

Finally, runtime errors could be occurring because your computer has become infected. Viruses and other malware usually have one of two purposes: to steal data and otherwise take advantage of your computer’s resources, and just to cause havoc. The first kind tends to be quiet and not get in the way, while the second tends to make itself known. In either case, the only real solution is to run a virus and spyware cleaner. Consider running more than one, just to be on the safe side.